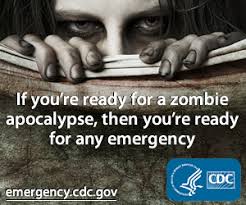 The following announcement is an update from DHS and FEMA. If Janet Napolitano would be more concerned with securing our borders than protecting us from zombies, she might not have to be in front of Congress testifying about her lack of knowledge for Fast and Furious.

Do you think that “zombie” is their codename for patriots?

The Kansas Division of Emergency Management has proclaimed October to be Zombie Preparedness Month – are you ready for a zombie apocalypse?

Earlier this year, the Centers for Disease Control and Prevention’s Office of Public Health Preparedness and Response developed information on how to prepare for a zombie takeover and a zombie pandemic. Designed as a fun way to deliver preparedness information, the genre has spread as fast as a mutant virus attacking a zombie’s vital organs. With the Halloween holiday coming up, it’s a good time to make sure that your Zombie Survival Kit is fully stocked!

Emergency kits from natural disasters provide a good starting point for collecting supplies needed to survive the rise of the undead. Make sure to include water, food, gloves and protective gear, and other supplies necessary to survive until “you can locate a zombie-free refugee camp”. Consider adding in more unorthodox items – such as those to assist with zombie defense – as well.

After putting together your kit, you should also develop an emergency plan with your family. In the event you have to leave town, it’s always helpful to know how to zombie proof your house. Don’t forget – while hungry, zombies don’t stop until they find some brains, so it’s a good idea to plan several alternative evacuation routes in order to get out of town fast.

Several localities are getting into the spooky spirit and celebrating Zombie Preparedness Month with simulation exercises. The Delaware County Office of Homeland Security and Emergency Management is hosting a Hazardous Materials Zombie Exercise; Virginia Beach CERT is having a Halloween Practical for first responder training; the University of Florida’s e-Learning Support Services previously created a zombie attack disaster preparedness exercise to assist with response to swine flu in 2009; and the City of Ferndale, WA is also observing October as Zombie Preparedness Month and encouraging residents to have a zombie attack survival kit and plan.

Don’t be scared, be prepared.

Lastly, in the event that the zombies catch up with you and force you to join the undead – here’s how to delay your decay.