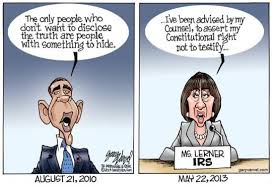 The Justice Department notified members of Congress on Friday that it is closing its two-year investigation into whether the IRS improperly targeted the tea party and other conservative groups.

There will be no charges against former IRS official Lois Lerner or anyone else at the agency, the Justice Department said in a letter.

The probe found “substantial evidence of mismanagement, poor judgment and institutional inertia leading to the belief by many tax-exempt applicants that the IRS targeted them based on their political viewpoints. But poor management is not a crime,” Assistant Attorney General Peter Kadzik said in the letter.

The IRS scandal exploded in May 2013 when Lerner answered a planted question at an American Bar Association event and apologized for inappropriately scrutinizing some groups applying for a tax exemption. Her response fueled a full-on scandal within hours that shook the Obama administration. Congressional hearings were held within weeks and the interim leader of the IRS was forced from office.

The same conclusion will be reached on the Benghazi hearings: Hillary will not only walk, she will become the Democrat party nominee for President.

Yep, it is all a dog and pony show with most Americans sitting at the edge of the bleachers cheering on the show.