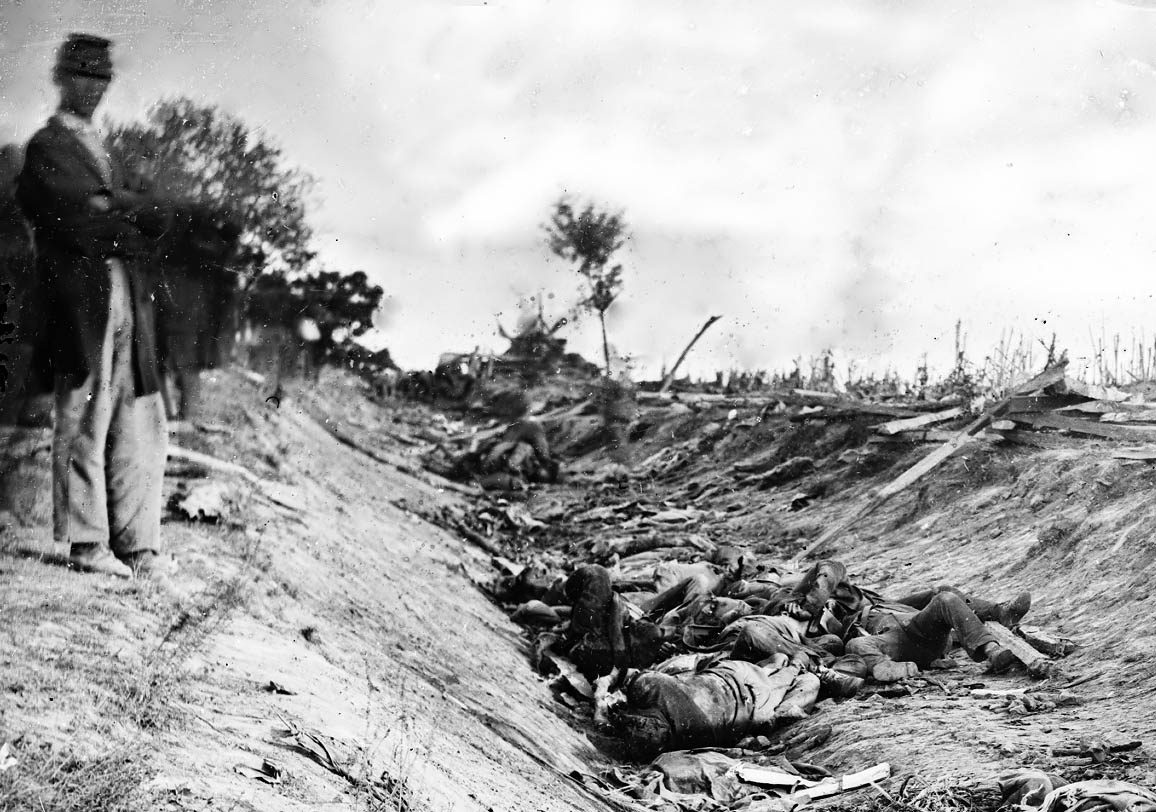 Glenn Beck has been focused on the Benghazi tragedy as an example of the dishonor prevalent in Washington, DC.  I agree. The administration has initiated a major cover-up of this scandal through misdirection and outright lies. Mr. Beck explains this morning (October 26th, 2012) on his radio show how we must not let the “pendulum” swing too far to the right or left. We must return the pendulum to the middle as Abraham Lincoln did. Excuse me? Isn’t this the same man who has been preaching that we must not have a French Revolution in the United States?

Mr. Beck’s continued excuses for Lincoln are an example of dishonor. Does anyone want another tyrant who was responsible for:

1. At least 618,000 Americans died in the Civil War, and some experts say the toll reached 700,000. The number that is most often quoted is 620,000. At any rate, these casualties exceed the nation’s loss in all its other wars, from the Revolution through Vietnam.

The Confederate strength, known less accurately because of missing records, was from 750,000 to 1,250,000. Its estimated losses:

2. Along with a declaring martial law, President Abraham Lincoln ordered the suspension of the constitutionally protected right to writs of habeas corpus in 1861, shortly after the start of the American Civil War. At the time, the suspension applied only in Maryland and parts of the Midwestern states.

In response to the arrest of Maryland secessionist John Merryman by Union troops, then Chief Justice of the Supreme Court Roger B. Taney defied Lincoln’s order and issued a writ of habeas corpus demanding that the U.S. Military bring Merryman before the Supreme Court. When Lincoln and the military refused to honor the writ, Chief Justice Taney in Ex-parte MERRYMAN  declared Lincoln’s suspension of habeas corpus unconstitutional. Lincoln and the military ignored Taney’s ruling.

3. Deported women from Georgia to the North because they were traitors: they worked in cotton mills making uniforms.

In July 1864, Union General William T. Sherman ordered the arrest and deportation of more than 400 women and children from the villages of Roswell and New Manchester, Georgia. Branded as traitors for their work in the cotton mills that supplied much needed material to the Confederacy, these civilians were shipped to cities in the North (already crowded with refugees) and left to fend for themselves. This work details the little known story of the hardships these women and children endured before and–most especially–after they were forcibly taken from their homes.

The Women Will Howl

Upon this news reaching the North, a New York newspaper wrote: “It is hardly conceivable that an officer bearing a United States commission of Major General should have so far forgotten the commonest dictates of decency and humanity…as to drive four hundred penniless girls hundreds of miles away from their homes and friends to seek their livelihood amid strange and hostile people. We repeat our earnest hope that further information may redeem the name of General Sherman and our own from this frightful disgrace.”   Sherman said the women were “tainted with treason and…are as much governed by the rules of war as if in the ranks. … The whole region was devoted to manufactories, but I will destroy every one of them”  Another paper wrote ” only think of it! Four hundred weeping and terrified Ellens, Susans and Maggies transported in springless and seatless army wagons, away from their loves and brothers of the sunny South, and all for the offense of weaving tent-cloth.” The women were kept in prison until they signed allegiance to the United States.  Those that did sign were released and sent across the Ohio River; those that didn’t stayed in prison.

Most of the returning Confederate soldiers died never knowing the whereabouts of their wives, sisters, children or cousins. Imagine the fate of those expatriated women.  How would they survive, some with children?

“I have no time for particulars. We have had a glorious time in this State, Unrestricted license to burn and plunder was the order of the day. The chivalry have been stripped of most of their valuables. Gold watches, silver pitchers, cups, spoons, forks, &c., &c., are as common in camp as blackberries. The terms of plunder are as follows: The valuables procured are estimated by companies. Each company is required to exhibit the
result of its operations at any given place. One-fifth and first choice falls to the commander-in-chief and staff, one-fifth to corps commander and staff, one-fifth to field officers, two-fifths to the company. Officers are not allowed to join in these expeditions, unless disguised as privates. One of our corps commanders borrowed a rough suit of clothes from one of my men, and was successful in his place. He got a large quantity of silver (among other things an old milk pitcher), and a very fine gold watch from a Mr. DeSaussure, of this place (Columbia). DeSaussure is one of the F. F. V.’s of South Carolina, and was made to fork out liberally.

Officers over the rank of captain are not made to put their plunder in the estimate for general distribution. This is very unfair, and for that reason, in order to protect themselves, the subordinate officers and privates keep everything back that they can carry about their persons, such as rings, earrings, breastpins, &c., &c., of which, if I live to get home, I have a quart. I am not joking. I have at least a quart of jewelry for you and all the girls, and some No. 1 diamond pins and rings among them. General Sherman has gold and silver enough to start a bank. His share in gold watches and chains alone at Columbia was two hundred and seventy-five.

5. Unconstitutional acts carried out by Lincoln are documented in Judge Andrew Napolitano’s book “The Constitution in Exile“.

Lincoln’s “actions were unconstitutional and he knew it,” writes Napolitano, for “the rights of the states to secede from the Union . . . [are] clearly implicit in the Constitution, since it was the states that ratified the Constitution . . .” Lincoln’s view “was a far departure from the approach of Thomas Jefferson, who recognized states’ rights above those of the Union.” Judge Napolitano also reminds his readers that the issue of using force to keep a state in the union was in fact debated — and rejected — at the Constitutional Convention as part of the “Virginia Plan.”

He also discusses Lincoln’s Confiscation Act of 1862, under which “any slaves behind the Union lines were captives of war who were to be freed and transported to countries in the tropics. This was in keeping with Dishonest Abe’s lifelong position (his “White Dream,” according to Ebony magazine managing editor Lerone Bennett, Jr, author of Forced into Glory: Abraham Lincoln’s White Dream ) of deporting all blacks from the U.S. “Colonization” was the euphemism that was used for this.

“The Confiscation Acts,” writes Judge Napolitano, “show that Lincoln did not have much concern for the slaves. He did not suggest to Congress that freed slaves should be granted civil rights or citizenship in Northern states. Once the freed slaves were transported out of the United States, they would no longer be Lincoln’s problem.” This is also why Lincoln tinkered with proposals for compensated emancipation in the border states while they were under U.S. military occupation during the war. These proposals included immediate deportation of any freed slaves. He saw the occupation of the border states during the war as an opportunity to begin ridding the country of “The Africans,” as he referred to black people, as though they were from another planet. Judge Napolitano quotes Lincoln in one of his debates with Stephen Douglas as saying what he repeatedly said throughout his adult life: “I will say then that I am not, nor ever have been in favor of bringing about in any way the social and political equality of the white and black races — that I am not nor ever have been in favor of making voters or jurors of Negroes.” “Lincoln was more concerned about the failure of [the seceding] states to collect tariffs than he was about slavery, ” says Napolitano.

So what is Glenn Beck advocating? I see no honor in Lincoln or his Restoring Honor at the feet of Lincoln. I know that Sacred honor and our founding principles are the only path back to Liberty. We must be careful not to be led astray by people whose agendas seem to be aligned with patriots but whose true motives sometimes ring hollow. The surest path to another French Revolution would be another repeat of the example shown by Lincoln.

I bought his book and Dixie and I both read it and were impressed by the man until I found out he most certainly is dishonest. He knows full well the truth about the Tyrant Lincoln as he would have been indoctrinated in such by the Judge. Lying for filthy lucre.

The question I’ve been puzzling over for the last year or so is “why does Beck perpetuate the Lincoln mythology?”

Beck appears to tell the ‘truth’ about history from Teddy Roosevelt to Obama, but he does not explore the roots of progressivism in formation of the Republican party and the invasion of European socialists / communists into the pre-civil war US after the failed European revolutions of 1848-1849.

Anyone have any insight into Becks’ unwillingness to explore 19th century history with the same energy he applies to the 20th century?

This is a mystery to me. Beck’s pursuit of the “truth” has been and will continue to be subject to doubt (along with David Barton) because of his continued deception of Lincoln. I agree with Brock’s assessment: Beck knows the truth. Which then begs the question you ask: why?

And his radio broadcast was turned off at this point.

I think you should post the question directly to Beck (regarding Lincoln). Would be interested in his response. In the meantime, the house is burning down. Let’s put the fire out, THEN check to see whether it was matches or a lighter that started the fire. Or maybe not -- maybe there are some people that are just drawn to history…a good thing. But we need you historians “at the front”, too.

I agree that we need to be focused the events we will be facing in the very near future. I had to “vent” hearing Beck advocate using Lincoln’s example to save the country. This will lead to a French style revolution.

Let us keep our eye on the ball and that is the impending war, civil unrest and economic collapse.

Tina -- I have written Glenn Beck many times on a range of topics and never receive more than an automated acknowledgement of message delivery.

that sux, Hans…I wonder if the question can be posted on his Facebook page? (where everyone can see it)? I would be happy to post it, if you don’t do Facebook…maybe I can just post a link to this article. That would probably be best. Let me see if I can do it. Will keep ya’ll posted.