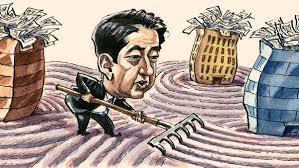 That deep red premarket color on your terminal means it must be a non-Tuesday. Just kidding.

Anyone expecting Abe to announce definitive, material growth reform instead of vague promises to slay a “deflation monster” last night was sorely disappointed. The country’s PM, who may once again be reaching for the Immodium more and more frequently, said the government aims for 3% average growth over the next decade and 2% real growth, raising per capita income by JPY 1.5 million. The market laughed outright in the face of this IMF-type silly vagueness (as well as the amusing assumption that Abe will be still around in 7 years), which left untouched the most critical aspect of Abenomics: energy, and nuclear energy to be specific, and sent the USDJPY plummeting well below the 100 support line, printing 99.55 at last check. But more importantly, after surging briefly at the opening of the second half of trading to mask a feeble attempt at telegraphing the “all is well”, it rolled over with a savage ferocity plunging 700 points from an intraday high of 13,711 to just above 13,000 at the lows: yet another 5% intraday swing in a market which is now flatly laughing at the BOJ’s “price stability” mandate. Tonight’s drop has extended the plunge from May 23 to 18.4% meaning just 1.6% lower and Japan officially enters a bear market.

Europe, clearly secondary to yet another night of Japanese fireworks, reported a second estimate of GDP at -0.2%, same as the previous and same as expected: sorry folks, the recession is going on, despite Rajoy’s obvious attempts to put the upward thumb on Spanish economic data, with Spain’s Service PMI coming at a laughable 47.3 from 44.4 previously, the highest in 23 months. Other Service PMI readings were largely weaker than expected (Germany 49.7, Exo. 49.8, Italy 46.5, Exp. 47.5, France 44.3, Exp. 44.3), leading to the broader Eurozone Service PMI number printing at 47.2 vs Exp. 47.5. Most importantly, and proving there is no recovery on the European horizon as long as the lending machinery remains clogged up was Eurozone retail sales, which plunge from a -0.2% change in March to -0.5% in April. However, none of the above will matter once the Japanese carry trade dynamics change as Abenomics begins to be faded much more aggressively in the coming weeks, resulting in a first slow then fast blow out in peripheral yields. Then the real “post-fauxterity” fun begins.

Summarizing the news in bulletin format via Bloomberg: