Is Anyone Keeping Score? 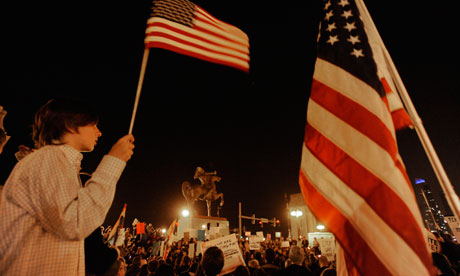 Although people are being arrested at occupation sites around the country, our media is downplaying this aspect of this “populist” movement of the 99%.  The following excerpt is from an article in the United Kingdom. Raleigh arrested 19 protesters last Sunday evening which is 19 more that all of the TEA Party events here over the past thirty months.

Does this mean that the TEA Party events were peaceful and law abiding or that the occupiers have more conviction in their cause? I know that most of our protests were treated respectfully by law enforcement but there also were cases where we were treated poorly and unlawfully. Wilmington, NC is a case where our Eric Holder protest was not treated with respect or lawfully by the police. Most other cases consisted of police taking action without cause or legal basis but it was only minor attempts to show us who was in charge.

More egregious were the police who acted badly under orders who apologized for their actions but still carried out these orders. The point of this article is to ask what level of compliance patriots are willing to do in order to promote freedom? As of now, the occupiers are ahead. Unfortunately this is not a game, it is our future.

About 130 protesters have been arrested at an Occupy Chicago demonstration after they erected tents and refused to leave a park at its closing time, police said.

The protesters were charged with violating a city ordinance and most were released after agreeing to appear in court, Chicago police said.

The breakup of the protest in Grant Park, next to Lake Michigan, was the second mass arrest of demonstrators from Occupy Chicago in the past week. Last weekend, about 175 protesters were arrested.

Grant Park, the site of major anti-war protests during the Democratic convention in 1968, is closed after 11pm.

The Occupy protests began more than a month ago in New York and focus on anger at government bailouts of big banks and persistent high unemployment.

Hundreds of Occupy Wall Street demonstrators have been arrested in New York and there have also been numerous arrests in Tampa, Cincinnati, Des Moines, Minneapolis, Denver and other cities.