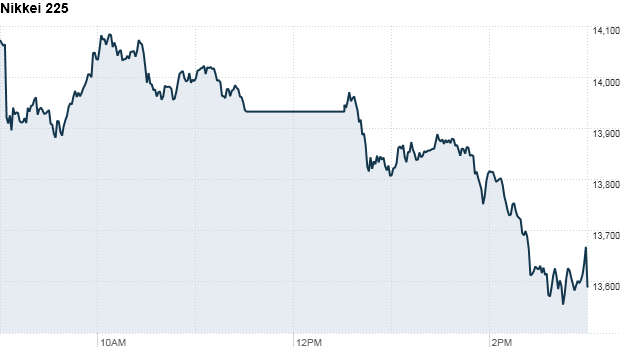 There are many correlations between the Japanese and American economies:

1. Both import a majority of their petroleum requirements.

2. Both economies are based in capitalism.

4. Both have leaders who do not understand economics.

5. Both have inflated stock markets.

There are differences also but the most important correlation is the unlimited printing of fiat currencies. In Japan’s case, the initial benefits of Abenomics (based on the policies of prime Minister Shinzo Abe) saw an explosive rise of their Nikkei index and gave their people hope in a false economic recovery. In our case, stimulus is still a means to redistribute our wealth, falsely prop up our stock market and cover up the continued mortgage crisis. Abenomics was implemented late in 2012. It took six months for it to flame out and leave the Japanese people with high inflation.

Is the Abenomics honeymoon over?

The Nikkei’s decline, which wiped out all the gains made by the index in May, is the second such dramatic drop in a week. Last Thursday, the Nikkei dropped 7%, its biggest single-day loss since the 2011 earthquakeand nuclear disaster.

The index is now more than 10% off its peak and in a technical correction.

Two of Abenomics’ three policy pillars are already in place. Japan has ramped up government spending and the central bank is injecting money into the economy on a massive scale. Abe is working on a slate of structural economic changes designed to make the country’s labor market more flexible and encourage women to enter the workforce.