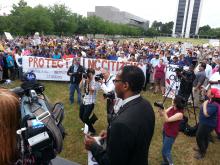 Another (Mega?) Moral Monday in Raleigh at the General Assembly. 1000 people in attendance and 15o were arrested.

1. Since the rallies are held during the day and are now becoming a fixture, when do these people work?

2. Why are there no counter protests? Could it be that these rallies are only to incite civil unrest and promote the Rev. Barber’s agenda? It is hard to have a counter protest when the people supporting the looters have to work.

3. The costs incurred by the GA and Raleigh police are approaching $40,000.  Your tax dollars at work. What is the plan by our “leaders” to address the demands of the protesters?

4. What are the demands of the protesters? From WRAL:

Upwards of 150 people were arrested outside the doors to the state Senate chambers, where demonstrators chanted, sang and delivered speeches decrying what they called a regressive agenda that neglects the poor. All of the protesters were released by 5 a.m. Tuesday.

5. How many arrests will have to be made before people become aware of these events across the state? The trend based on arrests is obvious:

6. How long before the legislators compromise to meet their “demands”?

6. Why can’t our officials just “Deny” their permit to protest? Since they result in numerous arrests each time.

Or are they trespassing because they don’t have a permit?

Hey, Bart, gotta question for you …

Are you suggesting that All participants at these events should be considered guilty until proven innocent?

Or are you suggesting “we” should use the same tactics (denial of permit) against “them” which we considered so offensive to liberty?

“… no law … abridging the freedom of speech, … or the right of the people peaceably to assemble, and to petition the Government for a redress of grievances.”

The key word is “peaceably” … turn your attention there for solutions.

Once their actions are less than peaceful, retaliatory force is justified.

I am still waiting for the Republican governor to “allow” the people access to hold events at the state Capitol building.

The Georgians in Tbilisi handled a protest by cultural warriors pretty effectively.

The state is more gerrymandered now than any other time in its history. Large groups of people, such as African Americans, are having their voices systematically weakened by highly concentrating democratic-leaning populations in a few districts and splitting up these groups among other districts where they will never statistically be the majority regardless of the quality of the representative. We vote about 50-50 Republican Democrat here, but the legislature is split 65-35. This Republican fuzzy math, that may very well be illegal (court case pending), is the only reason there is a Republican super-majority in the legislature.

I’m generally more conservative, but I strongly dislike gerrymandering because I think it corrodes democracy no matter who does it. So, while I don’t agree with all the protesting, at least I understand it.

You must really hate your name.

“Strange game. The only winning move is not to play.”

Not playing guarantees you lose, there is no winning move.

Mr. Mander,
You have got to be kidding. Before the districts were redrawn last, they looked like snakes.
They were drawn to cover the demoncrat voter base and assure as many leftist as possible won.
Now at least they represent geographic regions of the state.
Buy you know all this, you’re just being a butt-head troll and trying to stir feces.
Great work David, between you and Brock and Roger, y’all find some great things to read and
think about.