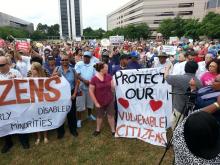 More than 100 people were arrested Monday at the largest demonstration yet of the North Carolina NAACP’s weeks-long protest of the conservative policies of the Republican-led General Assembly.

Police estimated that roughly 1,000 people attended a rally late Monday afternoon behind the Legislative Building on Halifax Mall. Hundreds then entered the building. Upwards of 150 people were arrested outside the doors to the state Senate chambers, where demonstrators chanted, sang and delivered speeches decrying what they called a regressive agenda that neglects the poor.

Activist groups estimated the crowd at about 1,600.

The National Association for the Advancement of Colored People has been holding weekly protests in Raleigh since mid-April, and what started with 17 arrests and tens of supporters back then has grown every week, bringing the total number of arrests to nearly 300 after five weeks of protests.

Its just the left again whining about our historicly elected representatives who are trying to get
our state out of the hole Demoncrats have dug. Wonder when the OWS crowd will join them?

Lawmakers including Sen. Neal Hunt, R-Wake, have taken note but say the mass arrests aren’t affecting what’s going on inside the legislature.

“They certainly have an opportunity and privilege and voice opinions, but I don’t think it’ll make a difference though,” Hunt said. “It’s basically a total difference in philosophy. We think that free enterprise is the best way to go to make sure people have the motivation to do the best they can for themselves. The other side is government needs to do more and more.”