Nancy Pelosi: We ‘couldn’t be prouder’ of ObamaCare 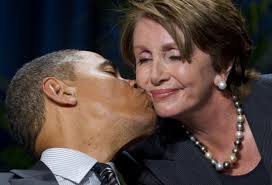 House Democratic Leader Nancy Pelosi defended the president’s healthcare law as “a winner” despite worries of increasing premiums and the drag it could have on Democrats this fall.

Four years after the Affordable Care Act was signed into law, Pelosi defended the hiccups of its implementation in a rare recess-week press conference. The California Democrat pushed back on the idea that ObamaCare would hinder Democrats’ hopes in this year’s midterms, saying, “I believe that it’s a winner.”

“The facts are these: Since the enactment of the Affordable Care Act, the growth in healthcare costs has slowed dramatically,” she said. “That includes the cost paid by government, by businesses and individuals.”

The clock is ticking as the end of March is approaching and the report on the ACA’s status is released. The states may not have nullified this “tax”, but the people have nullified it by not rejecting it.

Lexington Libertarian | The Collapse of Obamacare!