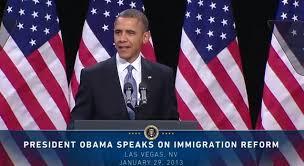 President Barack Obama said today America needs “more immigrants” to increase the number of people who pay taxes to the federal government and to populate the national workforce.

That contrasts with the arguments he made at a recent Planned Parenthood conference, where he ridiculed efforts limit abortion and called on the conferees to help make sure that all American women know that Obamacare mandates that insurance companies provide them with free contraceptives.

The number of abortions that have taken place in the United States over the past 40 years is about five times as great as the population of illegal aliens the president would like to legalize.

In his weekly address on Saturday, Obama called on the Republican-controlled House of Representatives to pass the immigration bill recently passed by the Senate. “It would offer a pathway to earned citizenship for the 11 million people who are in this country illegally” and “would also provide a big boost to our recovery,” Obama said.