So, GloboCap has crossed the Rubicon. The final phase of its transformation of society into a pathologized-totalitarian dystopia, where mandatory genetic-therapy injections and digital compliance papers are commonplace, is now officially underway.

On November 19, 2021, the government of New Normal Austria decreed that, as of February, experimental mRNA injections will be mandatory for the entire population. This decree comes in the midst of Austria’s official persecution of “the Unvaccinated,” i.e., political dissidents and other persons of conscience who refuse to convert to the new official ideology and submit to a series of mRNA injections, purportedly to combat a virus that causes mild-to-moderate flu-like symptoms (or no symptoms of any kind at all) in about 95% of the infected and the overall infection fatality rate of which is approximately 0.1% to 0.5%.

Austria is just the tip of the New Normal spear. Prominent New-Normal fascists in Germany, like Der Führer of Bavaria, Markus Söder, and Minister of Propaganda Karl Lauterbach, are already calling for an allgemeine Impfpflicht (i.e., “compulsory vaccination requirement”), which should not come as a surprise to anyone.

The Germans are not going sit idly by and let the Austrians publicly out-fascist them, are they? They have a reputation to uphold, after all! Italy will probably be next to join in, unless Lithuania or Australia beats them to the punch.

But, seriously, this is just the beginning of the Winter Siege I wrote about recently. The plan seems to be to New-Normalize Europe first — generally speaking, Europeans are more docile, respectful of all authority, and not very well armed — and then use it as leverage to force the new pathologized totalitarianism on the USA, and the UK, and the rest of the world.

I do not believe this plan will succeed. In spite of the longest and most intensive propaganda campaign in the history of propaganda, there remain enough of us who steadfastly refuse to accept the “New Normal” as our new reality.

And a lot of us are angry, extremely angry … militantly, explosively angry.

We are not “vaccine hesitant” or “anti-vax” or “Covid-denying conspiracy theorists.” We are millions of regular working-class people, people with principles, who value freedom, who are not prepared to go gently into the globalized, pathologized-totalitarian night.

We no longer give the slightest shit whether our former friends and family members who have gone New Normal understand what this is. We do. We understand exactly what this is. It is a nascent form of totalitarianism, and we intend to kill it — or at least critically wound it — before it matures into a full-grown behemoth.

Now, I want to be absolutely clear. I am not advocating or condoning violence. But it is going to happen. It is happening already. Totalitarianism (even this “pathologized” version of it) is imposed on society and maintained with violence. Fighting totalitarianism inevitably entails violence.

We are not “vaccine hesitant” or “anti-vax” or “Covid-denying conspiracy theorists.” We are millions of regular working-class people, people with principles, who value freedom, who are not prepared to go gently into the globalized, pathologized-totalitarian night.
You betcha

One of our biggest issues is we are always playing defense and reacting to what TPTB are pushing. What if a list like this was accidentally leaked? I wonder how the Dutch politicians feel about it? 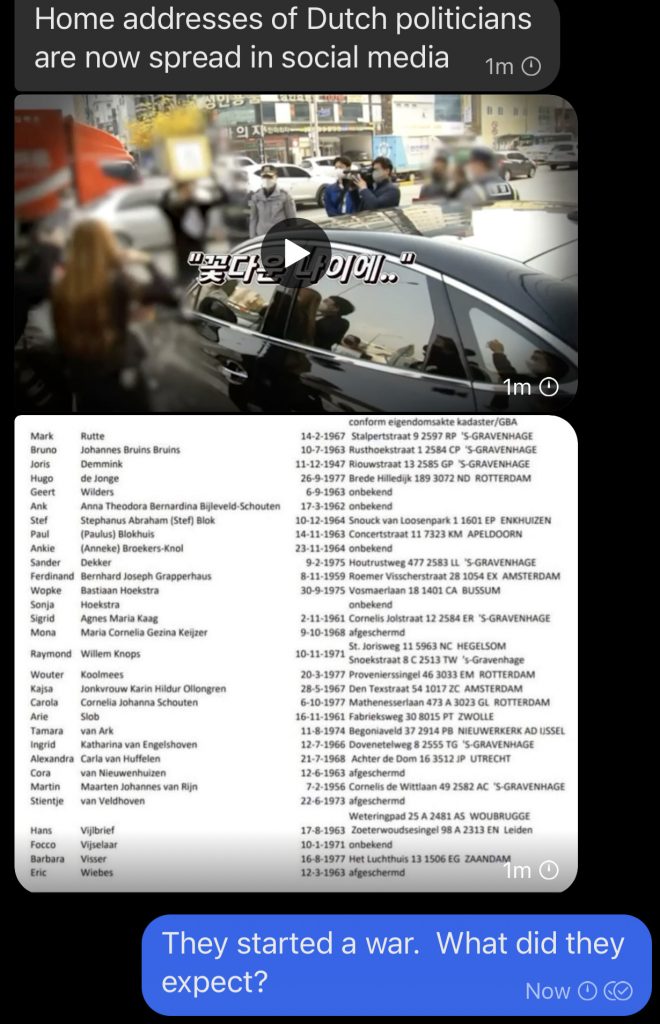 Great Rob we need lists. I will try to get to work.

Bring it. az border is wide open. groups of dozens of illegals accompanied with dudes with AK’s coming in. i do not see ANY border enforcement. dudes in full camo coming in

I will not conform or submit to these evil bastards demands, I will fight them until my last breath. You cannot at this point hope they will leave you alone. So I prepare for war.