Patriots Do Understand the Purpose of the 2nd Amendment 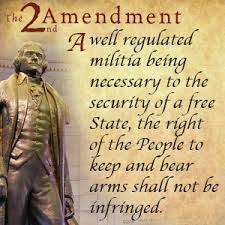 The following excerpt outlines the results from a Gallup poll concerning the record high percentage of Americans who now own a firearm. I must agree with the conclusion presented at the end of the article.

The purpose of the second amendment is to protect the citizens of our country from our own government. The first step to overthrow freedom has always been to disarm the people.

Gun Ownership Soars To 18 Year High: 47% Of Americans Admit To Owning A Gun

Americans may be fleeing from stocks in droves, but they sure aren’t shy about rotating the resulting meager liquidation proceeds into weaponry. According to Gallup, “Forty-seven percent of American adults currently report that they have a gun in their home or elsewhere on their property. This is up from 41% a year ago and is the highest Gallup has recorded since 1993, albeit marginally above the 44% and 45% highs seen during that period.” Considering the social situation “out there”, and the fact that the world is one badly phrased or translated headline away from a complete HFT-facilitated market collapse, this is hardly all that suprising.

Women are more armed than ever. Perhaps it is best not to piss too many off

Gallup’s conclusion: “A clear societal change took place regarding gun ownership in the early 1990s, when the percentage of Americans saying there was a gun in their home or on their property dropped from the low to mid-50s into the low to mid-40s and remained at that level for the next 15 years. Whether this reflected a true decline in gun ownership or a cultural shift in Americans’ willingness to say they had guns is unclear. However, the new data suggest that attitudes may again be changing. At 47%, reported gun ownership is the highest it has been in nearly two decades — a finding that may be related to Americans’ dampened support for gun-control laws. However, to ensure that this year’s increase reflects a meaningful rebound in reported gun ownership, it will be important to see whether the uptick continues in future polling.”