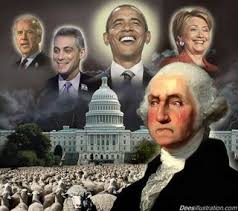 The following excerpt from the Rush Limbaugh radio broadcast comes from an article at Canada Free Press. This is the site that exposed the breach of public trust in the 2008 presidential elections: no state checked Obama’s requirements to be a valid US citizen in order to be on the ballot. A lawsuit was filed in California to make him validate his citizenship but the courts would not schedule a hearing even though there was time.

So now we have a country where the Obama administration has set up a shadow government of czars, collapsed our economy and raised unemployment to levels approaching the Great Depression. His end game: push the people from the bottom up with civil unrest so that we will accept martial law and the suspension of elections in 2012.

Why is Canada Free Press so insistent on exposing the truth in the United States? As seen in their logo below:

…Because without American there is no Free World

Governor Beverly Perdue tested the waters for the president this week by asking for a suspension of Congressional elections in 2012. The real question we need to ask ourselves is why Congress is not denouncing her statement?

With absolutely no proof of any kind of who he really is, Barack Obama made it to the Oval Office in 2008.  There was no media vetting of the largely absentee senator from Illinois, who even back then had the temerity to compare himself to Abraham Lincoln.   All anyone ever had to go on was an autobiographical book suspected of being ghost-written by an unrepentant domestic terrorist.  We all know how it goes with politicians and autobiographical books.

When Nancy Pelosi writes hers she will claim she trumps Mother Teresa, the Calcutta saint, not the one married to John Kerry. If Harry Reid ever gets around to it, writing his, wine will turn to vinegar overnight. You can claim to be anyone you want in a book, and that’s what Barry Soetoro did.

The point is that Barry Soetoro took the name Barack Hussein Obama, got himself elected and immediately began pushing the country so many look up to, right up to the precipice and nobody—nobody—has been able to stop him.

Now when we have a narcissistic Obama plunging in the polls, a democrat governor in North Carolina is pushing the envelope for suspending elections and covering up a notion she dropped a bombshell by claiming she was only using hyperbole to make a point for a Rotary Club.

If the election were held tomorrow, Obama would go down in a landslide strikingly more humiliating than the shellacking he and his party got—and never got over—in the midterms