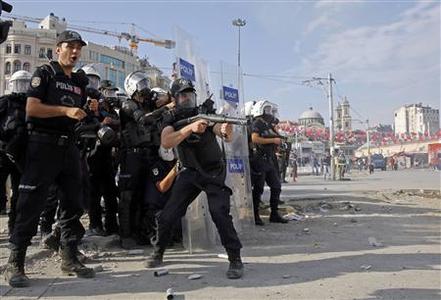 Turkish riot police fired tear gas and water cannon at hundreds of protesters armed with rocks and fireworks on Tuesday as they tried to take back control of a central Istanbul square at the heart of fierce anti-government demonstrations.

Hundreds of riot police backed by armored vehicles surrounded Taksim Square as bulldozers began removing barricades of paving stones and corrugated iron built by the protesters. What began as a protest at redevelopment plans for the square has grown into an unprecedented challenge to Prime Minister Tayyip Erdogan’s Islamist-rooted government and divided Turks.

The unrest has damaged investor confidence in Turkey, previously an emerging market success story. The central bank said it would intervene if needed to support the lira, after the currency fell to its weakest against its dollar/euro basket since October 2011. The cost of insuring Turkish debt against default rose to the highest in ten months, although it remained far from crisis levels.