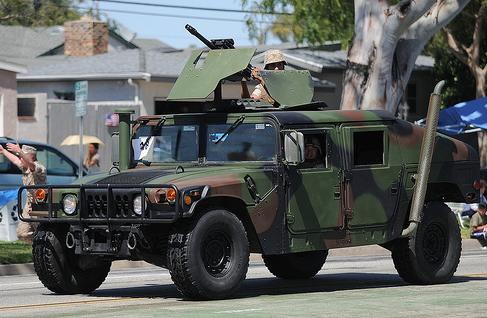 I tried to tweet this but the website in question, SmallWarsJournal.com, causes all tweets to go to the home page. Please spread and repost this. It needs to be seen by as many people as possible. Here’s the link:Full Spectrum Operations in the Homeland: A “Vision” of the Future

This isn’t some wild bee-ess from some Alex Jones site. This is the real deal. The author is a retired Colonel currently on staff at Ft. Leavenworth, which is the hub of all flag officer advanced education and indoctrination. Ft. Leavenworth is not called “the Little Pentagon” for nothing.

The piece is lengthy, but worth the read. It is basically war gaming how the United States military would be deployed to put down a “Tea Party insurgency”. Some choice quotes:

Under present law, which initially stemmed from bad feelings about Reconstruction, the military’s domestic role is highly circumscribed. In the situation we lay out below, even though the governor refuses to seek federal help to quell the uprising (the usual channel for military assistance), the Constitution allows the president broad leeway in times of insurrection.

Coupled with a gradual build-up of federal forces in the local area, all covered by the media, the effect of this pressure will compound over time and quite possibly cause doubt about the correctness of the events in Darlington in the minds of its’ citizens and the insurrectionists who control the town…

The design of this plan to restore the rule of law to Darlington will include information/influence operations designed to present a picture of the federal response and the inevitable defeat of the insurrection.

Combat units will conduct overt Show of Force operations to remind the insurrectionists they are now facing professional military forces, with all the training and equipment that implies…

A focus on the humanitarian aspect of the effort will be politically more palatable for the state and local officials. Federal forces continue to tighten the noose as troops seize and secure power and water stations, radio and TV stations, and hospitals.

and this from the comment thread, which is every bit as interesting as the article itself:

A note of caution to those who have taken offense to the Tea Party- disenfranchised white males is a reality. The more comments we post on here taking offense to the scenario show the public what shade our professional military truly has. The Black Panthers and Nation of Islam have been marginalized and will never gain traction because of their idiocy. The Tea Party and potential fundamentalist groups who follow it will have the resources to make things caustic.

Kevin Benson
Kevin Benson, Ph.D., Colonel, U.S. Army, Retired, is currently a seminar leader at the University of Foreign Military and Cultural Studies at Fort Leavenworth, Kansas. He holds a B.S. from the United States Military Academy, an M.S. from The Catholic University of America, an MMAS from the School of Advanced Military Studies and a Ph.D. from the University of Kansas. During his career, COL Benson served with the 5th Infantry Division, the 1st Armored Division, the 1st Cavalry Division, the 2nd Cavalry Regiment, XVIII Airborne Corps and Third U.S. Army. He also served as the Director, School of Advanced Military Studies. He works for AECOM.

Jennifer Weber
Jennifer Weber is an Associate Professor of History (Ph.D. Princeton, 2003) at the University of Kansas. Jennifer Weber specializes in the Civil War, especially the seams where political, social, and military history meet. She has active interests as well in Abraham Lincoln, the 19th century U.S., war and society, and the American presidency. Her first book, Copperheads (Oxford University Press, 2006), about the antiwar movement in the Civil War North, was widely reviewed and has become a highly regarded study of Civil War politics and society. Professor Weber is committed to reaching out to the general public and to young people in her work. Summer’s Bloodiest Days (National Geographic), is a children’s book about the Battle of Gettysburg and its aftermath. The National Council for Social Studies in 2011 named Bloodiest Days a Notable Social Studies Trade Book for Young People. Dr. Weber is very active in the field of Lincoln studies. She has spoken extensively around the country on Lincoln, politics, and other aspects of the Civil War.